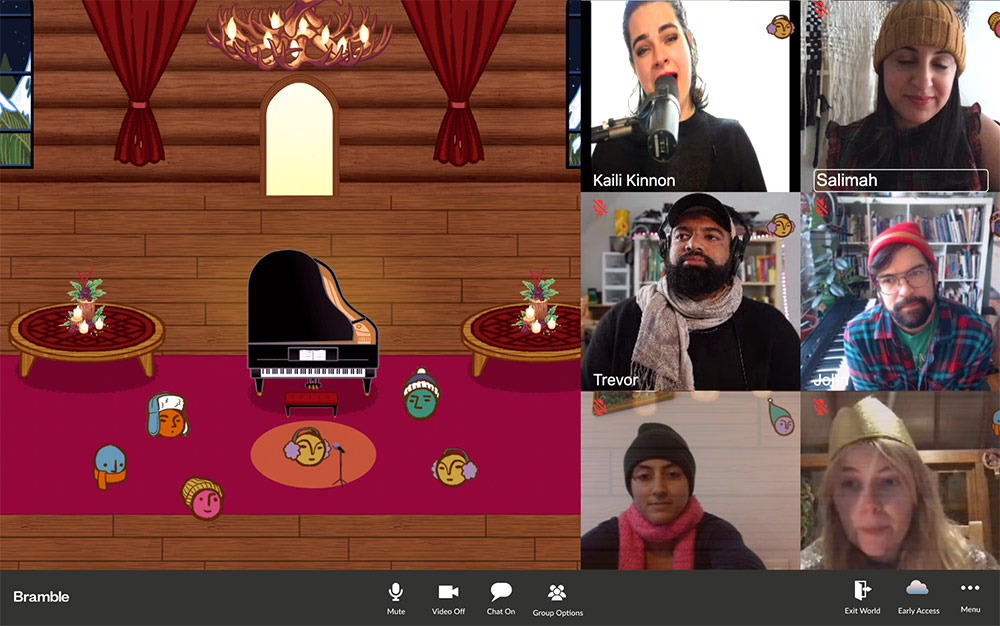 Salimah Ebrahim walked around a film festival party last November when someone recognized her and asked to go somewhere quiet to chat about her startup.

They walked through a few rooms where people were loudly chatting and music was blaring before they finally found some solitude on a balcony at the event space.

It was the kind of spontaneous interaction that happens all the time at parties, except in this case, Ebrahim and her fellow attendees were on Bramble, an immersive video chat platform that the company she cofounded, Artery, built after the coronavirus pandemic put their in-person events business on pause.

“Artery is a platform that uses technology to connect people in real life. The shorthand was the Airbnb for culture,” Ebrahim tells Fortune. “Essentially, Artery allows anyone to open up their living rooms, rooftops, backyards to host showcases that would last an hour or two that anyone in the city could pay to attend.”

For example, if a poet hosts a showcase in a living room, 95% of the proceeds would go to the artist, while 5% would go to Artery. The company piloted its platform in New York City and Toronto and noticed a “network effect,” in which people would attend a show in one of those cities and then go home to Iceland or Spain and host their own Artery events.

“We were getting set for a really big year, because we were coming on a couple years of understanding our community,” Ebrahim says of 2020.

And then, as the world knows all too well, the coronavirus pandemic forced the live events industry to a standstill.

“When we first went into lockdown, it was really sudden. It was very reactive. Our concern was for the creators and hosts in our community,” Ebrahim says.

Before the pandemic, a person would receive the host’s address after registering for an event. In March, Artery pivoted to offering basic livestream links, which Ebrahim says attracted hundreds of artists eager to perform and earn income during a difficult period.

“We did all these showcases, and there were moments of connection, but something was really missing for us. For all of these showcases that were coming online, they weren’t quite Artery,” she says. “It was not just the performance people came for. When people came to the showcase, they came to see the showcase, but also to connect with someone they know or meet a new friend. For us, the people in the room watching were always as important.”

While Zoom, Google Hangouts, Microsoft Teams, and a variety of other videoconferencing platforms have become vital tools for business during the new work-from-home era, Ebrahim says the “wall of faces” makes it difficult to foster human connection. On that point, Bramble began to take shape.

“What we were essentially trying to do was combine teleconferencing, videoconferencing, and gaming technology,” Ebrahim says.

Artery’s lead engineer has a background in gaming, while another member of the staff has engineering expertise working with spatial audio and video. They teamed up and created various virtual worlds that allow partygoers to intuitively walk the red carpet, go outside, wander through rooms, and quickly find friends.

In Bramble, people mingle the same way they would at a party. Small groups chat, while people can gather and exit at their leisure. Someone might play music in one room, prompting pairs of partygoers to walk together until they find a quieter place to chat.

Liz Aram, a library media specialist at North High School in Minneapolis, says she heard about Bramble from her brother, who used it for his work holiday party.

“I was trying to plan the staff holiday party for the teachers and was really struggling with how to create anything that didn’t just feel like more Zoom time,” Aram tells Fortune. “The reason it’s so unique is because we are not all trying to be on one giant screen taking turns talking. You can move around, mingle, go on adventures with people. Once people entered the world and figured out how to navigate, they just took off in pairs and groups.”

One of the teachers, who is in a band, was also surprised by a virtual speaker that blasted his music in one of the party rooms. Aram says the unique experience gave faculty the feeling that they had actually gone somewhere for their party. Hilariously, online behaviors even mimicked real life when people left the party.

“I started to notice when people were leaving, they moved around the room, approaching different groups saying goodbye, just like you would in a real party,” she says. “Then, the funniest part was, I noticed person after person who did not just log out when they finally left. They walked their little avatar out the door of the lodge and traveled down the snow-covered path to where we first entered the world. When they got to the location they entered, they would pause before they realized they just needed to log out, which they could have done from anywhere in the world.”

Aram is now working with Bramble’s team to create a virtual library, where she plans to offer tutoring to her students, who are still learning remotely.

The tech world is already seeing massive potential in Bramble. The platform is backed by a range of angel and institutional investors, including the founders of ICQ, Wattpad, and Meetup.

Bramble is targeting public early access in February. Pricing will vary based on whether users want to rent a Bramble world for a one-off party or pay a monthly subscription fee for access.

From film festivals and private performances to parties and learning, Ebrahim says the applications for Bramble are endless. She also envisions it as a venue where potential customers can interact with a sales team.

“What we see for Bramble and the next level of video chat is multiple people being able to share,” Ebrahim says. “Just as everyone built websites in the 1990s, everyone should have a Bramble as their new webpage. It’s a living room for people to gather in.”